About Myriad > Inside Myriad > Executive Bios

Paul J. Diaz, was named president, chief executive officer and member of the Myriad board of directors on August 13, 2020. Paul was most recently a partner at Cressey & Company (2016-2020), a private investment firm headquartered in Chicago, Illinois, which currently manages over $3.0 billion in committed capital. Cressey & Company is a healthcare focused middle-market private equity firm with over 30 years of success investing in and helping to build high quality healthcare businesses. Paul is the former president and chief executive officer and vice chairman of Kindred Healthcare, Inc. (NYSE:KND) (2002-2016) a Fortune 500 Company and one of the largest providers of healthcare services in the United States. At the time, Kindred had revenues of $7.2 billion, rehabilitation hospitals, sub-acute units, home health and hospice agencies and contract rehabilitation locations. For six years in a row, during his tenure as CEO, Kindred was ranked one of the Most Admired healthcare companies in the U.S. by Fortune magazine. Paul currently serves on the board of directors of DaVita (NYSE: DVA), the board of trustees of Johns Hopkins Medicine (where he serves as chair of Johns Hopkins Healthcare), and the board of visitors of the Georgetown University Law Center. He was formerly on the board of directors of PharMerica Corporation (NYSE: PMC), and previously served on the board of the federation of American Hospitals, and the Bloomberg School of Public Health at John Hopkins University. While chief executive officer of Kindred, Paul was a member of the Business Roundtable and the Wall Street Journal CEO Council. Modern Healthcare magazine named Paul one of the 100 Most Influential People in Healthcare and named him one of the top 25 Minority Executives in Healthcare for numerous years. In addition, Hispanic magazine named Paul one of the 25 Best Latinos in business in multiple years. Paul earned a bachelor’s degree in Finance and Accounting from American University’s Kogod School of Business and a law degree from Georgetown University Law Center in Washington, D.C.

Raymond Francot, executive vice president of International Operations, joined the company in January 2018. He previously served as Myriad’s Chief Commercial Officer in Europe. Prior to joining Myriad, Mr. Francot was vice president and regional general manager for Vertex Pharmaceuticals GmbH. Prior to Vertex, he was general manager at Gilead Sciences Germany GmbH, where he developed the company’s HIV franchise in Germany, Austria and Switzerland. Mr. Francot’s first role in the life sciences industry was with Baxter Healthcare where he held various international commercial positions within the renal division. Mr. Francot received his undergraduate and master’s degrees in law studies from the University of Maastricht and a master’s in business administration from Erasmus University of Rotterdam.

Alexander Ford, chief operating officer, joined the company in June 2010. Before being named to his current position, he served as president of Myriad Women’s Health and president of Myriad Genetic Laboratories. Prior to joining Myriad, Mr. Ford held leadership positions at Novartis, Sanofi-Aventis, Nektar Therapeutics and Pfizer in the areas of marketing research, product marketing, managed care, sales and business development. He has more than 30 years of experience in the pharmaceutical and biotechnology industries. Mr. Ford received his B.A. degree in Communications from the University of North Carolina, Wilmington and his M.A. degree from New York University.  He was a founding board member for BioUtah and was voted sales executive of the Year by the Utah Technology Council in 2012.

Benjamin G. Jackson, executive vice president, general counsel and secretary, joined Myriad in February 2006. He has held various positions in Myriad’s Legal Department, including serving as associate general counsel prior to assuming the role of general counsel. Mr. Jackson received his J.D. degree from the J. Reuben Clark Law School at Brigham Young University and a B.S. degree in microbiology, immunology, and molecular genetics from The University of California Los Angeles.

Nicole Lambert, group president of Myriad Oncology, Myriad Women’s Health and Myriad International, joined the company in June 2001. Prior to her current position, she served as general manager for the Oncology and Urology business units and vice president of Dermatology. Prior to joining Myriad, she was a genetic counselor at LabCorp. Mrs. Lambert received her bachelor’s degree in Biology and Sociology from Boston College and she earned her master’s in genetic counseling from Mt. Sinai School of Medicine at New York University.

Jerry Lanchbury, chief scientific officer, joined Myriad in September 2002. Before that, he was a researcher in molecular immunogenetics at Kings College London. He is a highly respected expert in immunogenetics with more than 100 reviewed research journal publications. Dr. Lanchbury graduated from the University of Aston, Birmingham, U.K. He earned his Ph.D. in Population Genetics from the University of Newcastle upon Tyne and subsequently completed a postdoctoral fellowship at the United Medical & Dental Schools of the University of London in Human Disease Genetics.

Clivetty Martinez, chief compliance officer, joined the company in 2019. Prior to Myriad, she served as senior vice president, chief compliance officer for Akorn Pharmaceuticals. She previously worked as vice president of compliance at Johnson & Johnson, Perrigo and director of compliance at Wyeth. Dr. Martinez received her Ph.D. in International Health Studies and has a master’s degree in Occupational Therapy from Duquesne University. She has compliance certifications for US, Europe and Latin America from Seton Hall, INSEAD University of Paris and University of Miami. She partnered with the University of Miami to develop the Executive Education in Compliance Program. She has been an international speaker on compliance topics and is considered a subject matter expert in her field. She is also member of the American College of Healthcare Executives, the Occupational Therapy Association and the American Business Women Association.

Ralph L. McDade is the president of Myriad RBM. Until August of 2013, he had been serving as chief operating officer. Dr. McDade was formerly strategic development officer for Myriad RBM and held that position since the Company’s inception in 2002. Prior to joining Myriad RBM, he was chief scientific officer for Luminex Corporation where he was closely involved with the development of xMAP technology. In addition, Dr. McDade was instrumental during this period in securing technology licensing agreements with over 20 strategic partners. He received his Ph.D. in Microbiology from the University of Texas Southwestern Medical School in 1980. Following postdoctoral training at The University of Connecticut Medical Center in Farmington, he held faculty positions at the Rockefeller University in New York and at Louisiana State University School of Medicine in New Orleans.

Paul “Chip” Parkinson, executive vice president for reimbursement strategy, joined the Company in 2016.  Previously, he was president of OmedaRx and chief pharmacy officer of Regence Blue Cross Blue Shield health plans. In this role, Mr. Parkinson was responsible for managing $1.7 billion in annual pharmacy spending for the Regence Blue Cross Blue Shield health plans in Utah, Washington, Oregon and Idaho, which have more than two million members.  Prior to that, he was vice president, Managed Markets and general manager, Urology at Myriad. During his tenure, Prolaris was included in the NCCN Guidelines for prostate cancer and received Medicare reimbursement. Before joining Myriad, he served in management and managed care leadership roles at Pfizer Inc.  Mr. Parkinson received his B.S. degree in Communications from Weber State University.

Bryan Riggsbee, chief financial officer, joined Myriad in October 2014. He previously served 10 years with Laboratory Corporation of America (LabCorp) where his most recent position was as senior vice president of Corporate Finance with responsibility for the financial planning and analysis and treasury functions. Prior to LabCorp, Mr. Riggsbee served in various finance roles with General Electric and began his career in the audit division of KPMG. He received a B.A. degree in Accounting from North Carolina State University, a B.A. degree in Political Science from the University of North Carolina at Chapel Hill and an M.B.A. from Northwestern University. Mr. Riggsbee is a Certified Public Accountant licensed in the State of North Carolina.

Mark Verratti, president of Myriad Neuroscience and Myriad Autoimmune, joined the company in January 2016. He previously served as SVP and chief sales and business development officer at Assurex Health. Mr. Verratti also held senior leadership positions with Forest Pharmaceuticals where he led commercial teams with revenues approaching $500 million dollars. In addition, he held senior and general management positions with Cyberonics/LivaNova leading teams in over 70 countries. He received a B.S. in Life Sciences with a minor in Physiology from The Pennsylvania State University. 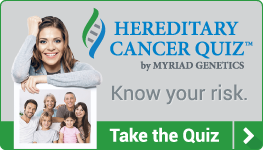 Take a 30-second quiz to help you find out if you’re at risk of hereditary cancer.

The Myriad myRisk® Hereditary Cancer test is a multi-gene panel that identifies an elevated risk for eight hereditary cancers.