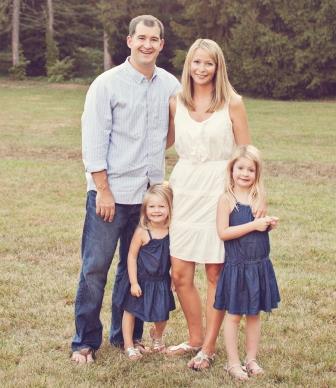 Heidi Believes in the Value of Genetic Testing

I have always felt lucky. My husband and I met in college when I was just 18 and were married shortly after graduation. We have an incredible relationship,
a strong marriage and both of us come from loving families. We also have two wonderful daughters, and I enjoy being a stay-at-home mom. We have an amazing
group of friends and live in a very close-knit community.

All of this is why the thought of having breast cancer never crossed my mind, even after I noticed the visible lump in my breast last October. I was 110
percent sure that what I had found was just a cyst. After all, I was only 35. No one in my family (on either side) had breast cancer and only one relative
had any kind of cancer (colon). In addition, I ate mostly healthy foods and exercised regularly. Still, I wanted to be sure, so I called my OBGYN who
scheduled me for a mammogram. My husband came with me, and we joked around as we waited for my name to be called, just enjoying spending some time together and unaware of what was about to unfold.

The mammogram led to an ultrasound. I’ll never forget the moment the doctor told me that it looked like I had cancer. My husband and I were floored by the
news. But we wouldn’t know for sure until the biopsy came back. Time crawled as we waited for those results. On November 20 (the birthday of my oldest
daughter and my sister), I got the call. I was diagnosed with Triple Negative Breast Cancer, Stage 2A. The news made me crumble to the floor. I could
barely pick up the phone to call my husband and tell him to come home.

Then I pulled myself together and decided to fight the cancer. After a battery of tests, treatment finally began in December. I had 16 rounds of
chemotherapy. I also knew I would need to have surgery at some point, either a lumpectomy or mastectomy. My doctor wanted to see how the tumor responded to
chemo, and she also wanted me to have genetic testing done because of my young age and the type of breast cancer I had. Still, because I had no family
history of breast cancer, my chances of having a mutation in the BRCA1 or BRCA2 gene was less than 5 percent. So, when the results showed that I was
positive for a mutation in the BRCA1 gene, I was surprised and devastated. I did not want to have major surgery – the thought terrified me. A
bilateral mastectomy was what I feared most – more than undergoing chemotherapy and losing my hair. I also did not want this to impact my children
or my sister. But mostly, I did not want to EVER have cancer again. Once the news sank in, I felt empowered. I was in control of my
health. I faced my fear and I am now recovering from a bilateral mastectomy and a prophylactic hysterectomy.

In the midst of all this, my mom was diagnosed with lung, spine and bone cancer. She passed away within one month of her diagnosis. The results of her
genetic test, which we received after her passing, showed that she was BRCA1 positive as well. Because of this, my sister was convinced to get tested. She
also is positive for the BRCA1 mutation. However, knowledge is power, and now she is able to take preventative measures to live a cancer-free life. At
first, I was terrified by the 50 percent chance that my daughters had inherited this genetic mutation. But now I am happy that they will have this
information so they can be proactive about their health.

Do I still consider myself lucky? Absolutely. I am lucky to be alive. I am lucky to have an amazing family and group of friends who made these past twelve
months much easier. I am lucky to live in a world where genetic testing exists. I am lucky because I had the knowledge to take the steps necessary to
drastically lower my risks of more cancer. I hope that my story will encourage others to talk to their doctors about hereditary cancer testing. In fact, I
believe that someday genetic testing could help us live in a cancer-free world.