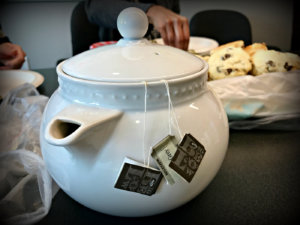 A variety of fine English foods

With Victoria Sponge Cake, clotted crème, and Branston pickle on their lips a small group of colleagues from across Myriad Genetics sat down for High Tea and a conversation with Jerry Lanchbury, Ph.D., Myriad’s accomplished chief scientific officer.

High Tea is an English tradition dating back to 1825 (Click here to learn more).  In contrast High Tea at Myriad is a new tradition that began last year as way for Jerry to share his love of English culture, and to meet and learn about fellow Myriadians.

After introducing and explaining the buffet-style spread of traditional English high tea foods – all prepared according to traditional specs by Margaret, Jerry’s wife – everybody had a chance to taste the foods and get their fill, while Jerry shared some details about himself and his career path that led to Myriad.

“Enough about me,” said Jerry.  “I’d like to go around the room to learn about all of you. What was your journey to Myriad?”

One by one, each person in the room shared their own unique journey on where they came from and what brought them to Myriad.   Diversity of experience was a theme.  Some came from small startups in Ohio, others from big companies and one person even managed tolls booths prior to joining Myriad.  A common thread among the group seemed to be that they choose to join Myriad to help improve the lives of patients in need.

Small company events like this are part of what makes Myriad unique, where the company culture is rooted in a pioneering spirit, teamwork and a friendly environment.  From senior executives to lab technicians and everyone in between there is a feeling that we are a united team.

When High Tea ended it was clear that every person in the room felt they had experienced something special.  An hour and a half before, the participants were strangers coming from different departments. They all left being newly acquainted friends and with a greater appreciation for one another’s contributions to the company.
Tea time can do that, and it’s possible this has been Jerry’s plan all along.