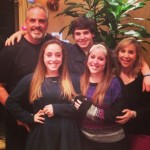 I think it is so important for me to tell my story — mostly because it is probably similar to other women’s stories, but also because it helps keep me
focused on awareness and being an advocate for genetic testing. As Ovarian Cancer Awareness Day on May 8 approaches, I realize it was just 4 short years
ago that I started having symptoms, but not knowing that the constipation I was feeling was one of those symptom.

Let me tell you why I think genetic testing is key to prevention and a true gift of knowledge to those of us who are BRCA mutation carriers. My paternal
grandmother had what they said was uterine cancer when she was about 48, in the mid-1950s. We never really talked about it because the fact that she had
had breast cancer was so evident from the radical mastectomy scars and prosthesis she wore in her D+ sized bra. She was 52 when the breast cancer was first
diagnosed. She also had thyroid cancer, carotid artery surgery, a pacemaker, and another bout with breast cancer at age 82, but she still lived to be 92.

After she died, I was really concerned that I, being the only daughter of her only child, my father, would somehow end up with breast cancer and was scared
about that. As a mother of three who was about to turn 40, I began to wonder if my future would hold the same fate as hers. So, I went to a breast surgeon who
had me fill out a multiple choice questionnaire. She scanned my form and said I wasn’t at risk. Relieved, I thought I would not need to worry about
following in her footsteps. At age 46, my ob/gyn decided that since I was of Ashkenazi Jewish decent, had finished bearing children, and had fibroids in my
uterus and cysts in my ovaries, I should think about a hysterectomy. Why, I asked? I’m too young to go through menopause and the cysts went away. Why would
I want to do that?

It is at this point that i should have been tested for the BRCA gene mutation
. But, that conversation with my healthcare professional never happened. Had he suggested I get tested, I may have never had to go through seven rounds of chemo while my
daughters were in their senior year of high school and my son was studying for his bar mitzvah. I wouldn’t have had to lose every hair on my body and deal
with checking ovarian cancer on every health form I filled out from then on. So, I tell , students, friends, family and anyone who will listen, how
important it is to ask for the test … and how even if a positive test for the BRCA mutation isn’t their result, there are so many other genetic mutations
that can be found. This is such powerful knowledge!

Now, I think that being diagnosed with Stage 3C ovarian cancer was a blessing of sorts. I did get to be tested and learned that I am BRCA1 positive. I had
a prophylactic mastectomy so that when I turned 52 this year, the concern that I would continue to follow along my grandmother’s path was no longer
something to stress over. My children will be tested and we will deal with their results as they come. But I also have the incredible opportunity to tell
my story and to share the information that the symptoms that I started experiencing almost exactly 4 years ago – bloating, constipation, lack of hunger, frequent urination,
exhaustion – can indicate ovarian cancer. Those symptoms should be a cause for concern and a reason to see the healthcare professional as soon as possible. We must all advocate for
ourselves – ask for tests, ask for another opinion and know our bodies so that we know when something is wrong. It is possible to survive ovarian cancer. When we join together, speak out and bring attention to this important subject, we will be able to make a difference in this fight.