We’re all familiar with the phrase “it runs in the family.” From an obvious family resemblance to a not-so-obvious inherited trait such as the shape of our earlobes, much of who we are physically comes from our DNA, which comes from the DNA of our biological parents.

The Human Genome Project estimates that we have about 20,000 genes. The genes in our DNA are like a tool kit, used by different cells in different ways. Most cells use only a few of the many, many possible functions of our genes.

All of Your Cells Contain Your DNA*

All cancers are caused by harmful mutations, or changes in DNA. Mutations in DNA happen regularly, but most of these changes are not harmful and do not cause cancer. The changes usually occur by chance; for example, when cells divide to produce new cells, a mistake in cell division could introduce a tiny change. Fortunately, these mutations are usually automatically repaired by your body.

Sometimes, however, the mutation is not repaired and is passed on when the cell divides. If the mutation is harmful and interferes with a critical function, such as regulating cell growth or DNA repair, the mutation can make the cells more cancer-like. If enough of these mutations occur in a cell, cancer may be the result.

“All cancer is genetic, in that it is triggered by altered genes. Genes that control the orderly replication of cells become damaged, allowing the cells to reproduce without restraint.”

As shown above, a series of random mutations can create cancer cells. Mutations can also be part of your genetic makeup from birth.

Two kinds of gene mutations are important in cancer:

Most cancers develop from random mutations, but up to 10 percent are inherited, or hereditary. Certain inherited genetic mutations can make it much more likely that someone with the mutation will get cancer, as well as develop it earlier or even develop multiple cancers in their lifetime.

Sometimes, however, a family will appear to have a hereditary cancer when what they actually share is a living or working environment that exposes them to radiation or chemicals that can cause mutations. Your healthcare professional can help you determine which could be true in your case.

If you do carry an inherited mutation that has been linked to cancer, knowing your risk of cancer can help you and your healthcare professional make better, more informed decisions about your healthcare, possibly before cancer has even a had chance to develop.

Which Relatives Are Important When Thinking About Hereditary Risk?

People with a family health history of a particular disease can take action to reduce their risk of developing that disease. To learn more about your biological inheritance, talk to your relatives, gather information on their health history and fill out a family tree. If you find that certain illnesses, such as breast or ovarian cancer, have appeared in more than one relative, you should talk with your healthcare professional and investigate the possibility of a hereditary cancer.

Am I at Risk of Hereditary Cancer?

To help assess whether you might be a candidate for testing, take the Hereditary Cancer Quiz.  This simple, 30-second quiz can help you get the information you need to discuss your risk of cancer with your healthcare professional and ask for further evaluation. If you take the quiz and find red flags in your own history or your family history, you may benefit from genetic cancer testing.

How a Hereditary Condition Can Be Passed on

Condition Affecting Members of a Family

How Risk Can Vary by Population

Just as an increased risk of cancer can run in families, some inherited conditions are more likely to occur in particular population groups. People in these groups may have inherited a specific genetic makeup from the ancestors they share. If the genes that are common to a group include a genetic mutation that can cause disease, that disease can occur more frequently in that group. For example, hereditary breast and ovarian cancer (HBOC) syndrome is more common in people of Ashkenazi, or Eastern European Jewish, ancestry.

myRisk is a genetic test that helps you understand. 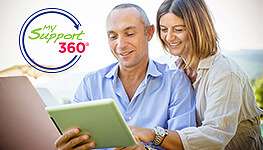 mySupport360 is an online educational resource on hereditary cancer testing for patients.