Approximately 10–15 percent of ovarian cancer and seven percent of breast cancer cases are caused by mutations in the BRCA1 or BRCA2 genes.  Individuals who carry a mutation in either the BRCA1 or BRCA2 gene have a condition called Hereditary Breast and Ovarian Cancer (HBOC) syndrome, which is associated with an up to 63 percent risk of ovarian cancer and an up to 87 percent risk of breast cancer by age 70.1-5 Mutation carriers who have already been diagnosed with cancer also have a significantly increased risk of developing a second cancer. Myriad offers gene panel testing that can be used to identify patients who are carriers of the BRCA1, BRCA2 or other gene mutations.

If a patient’s personal or family history indicates that he/she may be at increased risk of HBOC and other syndromes, genetic test results provide the most accurate means of assessing cancer risk. Knowing the potential risk can help you make better, more informed decisions about your patient’s health, before the onset of cancer or before a second cancer has developed.

Genetic testing for hereditary breast and ovarian cancer with the Myriad myRisk Hereditary Cancer panel should be considered if:*

You can use the Myriad Hereditary Cancer Quiz as a tool to help you identify patients who may benefit from hereditary cancer testing.

Get Your Custom Hereditary Cancer Quiz

Myriad myRisk® hereditary cancer genetic test confirms the presence of a BRCA1, BRCA2 or other gene mutation, the following medical management options may help to reduce your patient’s ovarian cancer risk and may either prevent or delay the onset of cancer or detect cancer at an earlier, more treatable stage, when outcomes are better:†

*Assessment criteria are based on individual medical society guidelines.

†Any discussion of medical management options is for general informational purposes only and does not constitute a recommendation. While genetic testing and medical society guidelines provide important and useful information, all medical management decisions should be made based on consultation between each patient and his or her healthcare professional. 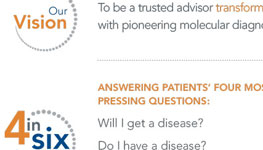 At Myriad, we are committed to making products that improve people’s lives.

Knowing your cancer family history can inform your medical decisions and improve the outcomes of your healthcare.